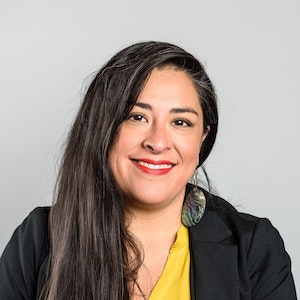 Colleen Echohawk is an enrolled member of the Kithehaki Band of the Pawnee Nation and a member of the Upper Athabascan people of Mentasta Lake.

As the founder of the Coalition to End Urban Native Homelessness, Echohawk is committed to homeless advocacy and changing the trajectory of Native American and Alaska Native people living away from reservations in urban places and experiencing homelessness. Echohawk is interested in creating systems and structures that help facilitate wellness, and encourage kindness and courage. Recognizing a lack of equity in housing design and development, and the profound impact that this can have on the well-being of people of color, Echohawk has turned her focus to equitable low-income housing development and indigenous-led design.

Echohawk’s education has been focused on organizational development and leadership; helping brilliant people do better work for the greater good. She is the co-founder and principal at Headwater People Consulting Group. Named as one of Seattle’s most influential people by Seattle Magazine (November 2019) and one of Seattle Met Magazine’s 50 most influential women in 2018, Echohawk has also been awarded the Adeline Garcia Community Service Award (2018), Antioch University’s Public Service Award (2018), and Crosscut Media’s Courage Award for Public Service (2016). Under Echohawk’s leadership, Chief Seattle Club received the Puget Sound Sage Visionary for Justice Award (2019), Seattle Community Law Center’s Equity Award (2018), the Neighborhood Builder Award (2017), and Municipal League of King County’s Organization of the Year (2016).

Colleen Echohawk serves on many local boards, including a Mayoral appointment to the Community Police Commission. Other board affiliations include Seattle Foundation, KUOW (National Public Radio member station,) Downtown Seattle Association, and All-Home Coordinating Board. She is also the former board chair at Red Eagle Soaring Native Youth Theatre and a former board member at the Pioneer Square Preservation Board.

In her spare time, she loves to read, sing karaoke, listen to National Public Radio and cook delicious food for her friends and family. Echohawk is a proud mom to two children and is married to Matt Hayashi.