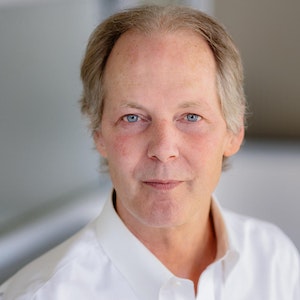 Bill O'Grady hosts Monday through Friday evening programming and into the early morning hours. He also voices most of the underwriting announcements heard throughout the day (the ones that begin, "Support for KUOW comes from..."). The influences he cites as helping him develop his radio voice, are the vocal training he got while studying music, and emulating the voices of the Firesign Theatre since adolescence.

His first radio job was with KUOW in 1986, writing scripts for a series of live classical music recordings, called Performance Northwest. Bill’s been commuting by bicycle into the University District from his home in North Seattle, for decades. He loves playing classical guitar, acoustic steel string guitar, electric guitar (with single-coil pickups and single-ended tube amps), and electric bass. He’s also an audiophile, again, with a preference toward vacuum tube gear.