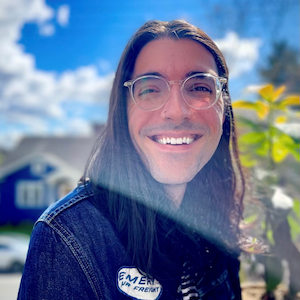 As Project and Production Officer, Jordan supports the fundraising efforts of KUOW’s philanthropy team while working closely with other internal partners. Jordan is responsible for producing intimate events for a small but mighty audience of generous KUOW donors.

Jordan, a graduate of the University of Florida's Warrington College of Business, has worked in various roles with UW Conference Services since 2015. In their time, Jordan has aided in the planning and execution of many large non-profit organizations’ events on UW campus such as iD Tech, National Student Leadership, Operational Smile, and the 2018 Special Olympics USA Games.

After moving from Gainesville, Florida to Seattle, Washington in 2015 for a role with the Space Needle corporation as an event photographer, Jordan eventually landed with the UW Conference Services Office. Originally a Floridian, Jordan can often be seen attempting to soak up any ounce of sun Seattle has to offer with their spouse and pug in tow. In their spare time they play music, paint and write fictional short stories.