How to properly drink soju, Korea's most popular spirit

Every culture has its own drinking customs. But sometimes those traditions clash with regulations.

Just before lunchtime, staff set up the grills at Palmi Korean BBQ in the University District. The restaurant offers Korean-style barbeque where diners grill meats at the table. And of course, soju.

Owner Andy Im says drinking soju is a way of life in the old country.

“People drink alcohol not to drink alcohol, but rather to socialize, to be able to bond with one another," he said. "So it’s a very important part of the Korean culture.”

Some people say soju is like Korean vodka. And like vodka, it’s a distilled spirit. It’s clear and has a neutral taste. It’s usually made with different kinds of grains. Unlike vodka, soju has a lower alcohol content.

There's also a proper way to serve it. It all depends on who’s at the table, Im explains.

“Traditionally, the senior person at the table would have the right to pour the drink," Im said. "So the senior would pour first and the younger would receive first.”

And then there's proper etiquette for drinking soju.

“You would receive the soju in a shot glass with two hands from the senior and you would have to turn away and not to face to face when you drink," Im says.

Christina Joo, a server at a Korean restaurant in Bellevue, adds: “It’s a sign of respect to turn away.”

Joo says restaurants want to continue the custom, but it clashes with liquor regulations.

Traditionally, soju is served by the bottle at the table. But doing that is against the law in the U.S.: Distilled spirits can be served only by the shot glass.

Many restaurants have found a compromise. They bring the bottle of soju and a tray of shot glasses to the table. Joo pours out the bottle into seven to eight shot glasses. Still, many customers aren’t always happy with the work-around.

“I’ve had customers, especially if they’re directly from Korea, actually get upset and mad and say, what are you doing, you know you’re supposed to do this by the bottle — that’s the traditional way to do it," Joo says. 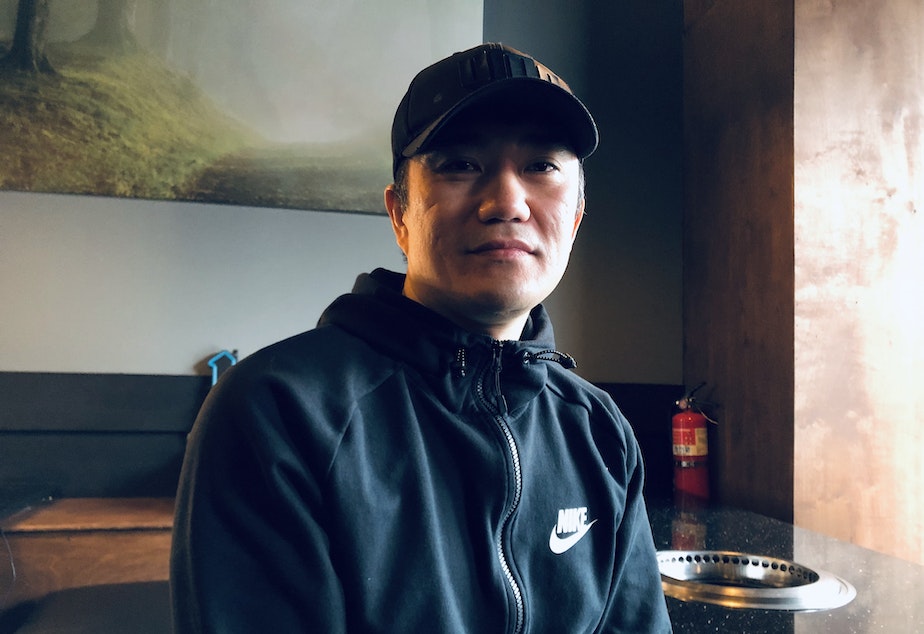 People drink alcohol ... to socialize, to be able to bond with one another. So it’s a very important part of the Korean culture. ANDY IM, Palmi Korean BBQ restaurant owner
Credit: KUOW Photo/Brie Ripley

A bill to allow soju to be served by the bottle has passed the state House. A similar bill is awaiting floor action in the Senate. If it passes, it could take effect later this year. Washington would join New York, California and Virginia with similar soju laws.

Joo looks forward to the change. It would make her job easier. She also thinks it would be an effective way to control alcohol consumption because people would be less compelled to drink when there’s a little left in the bottle — as opposed to a shot left on the table.

But the main purpose for the law is to help keep Korean soju customs. Restaurant owner Andy Im says there’s something about pouring soju for others that creates a bond.

It’s about filling each other’s glasses, one of the oldest traditions in Korean history.

We would love to hear your feedback on our reporting