Seattle Now: 'We have to stop celebrating these frickin' chefs'

One of the city's biggest big-deal chefs is taking a step back after a Seattle Times investigation into allegations of sexual misconduct and harassment against him. We talk with Melissa Miranda, chef and owner of Beacon Hill's Musang about how the industry needs to change.

When your favorite chef or artist or writer gets exposed for gross and unprofessional behavior, even though you've never met, it can feel personal. Tyra Banks Tape "I was rooting for you, we were all rooting for you, how dare you! Learn something from this!"

In a minute, we'll talk about the allegations of sexual misconduct against one of the city's brightest culinary stars. But first, let's get you caught up.

There's another quarter million shot of a lifetime drawing today and this time around, there's a year of free tuition up for grabs. That's if the winners claim it. Lottery officials say more than 100 winners from last week's drawing didn't respond to their messages. Those unclaimed prizes will get rolled over to next month's finale. Meanwhile, the state attorney general is warning consumers to be careful after getting some reports that scammers are using the vaccine lottery to steal personal information. The AG sent an alert yesterday reminding you lottery officials will never ask you for bank or social security information over the phone.

You might have noticed four huge shipping cranes floating across Elliott Bay. They showed up here Sunday from Shanghai and port officials say they mean Seattle can handle the most massive container ships in the world. The ZPMC super post Panamax cranes are among the largest on the west coast. They're part of the reopening of the port's terminal five and will start unloading cargo in the beginning of next year.

And if you thought it seemed a bit more soggy than usual Sunday, you were right. It was the second wettest June day in two decades. Seattle got nearly an inch of rain. The National Weather Service says showers will start to disappear tonight and get your sun hat and flip flops out because the second half of the week is going to be sunny and warm.

Mayor Jenny Durkan tape: Can we say city treasure among the things--- you know, we've got Tom Douglas in the house. We got Eduardo if you haven't been to his restaurants, I'm high on 'em, and I knew he was going to be here today. So I have a little treat for you too. I won't read the whole thing, but I will tell you this is Chef Eduardo Jordan day.

Patricia Murphy: That's Mayor Durkin giving him some love a couple of years ago and proclaiming and Eduardo Jordan day in Seattle. Jordan is known around the world. He has great restaurants in the city he has two James Beard Awards. But now Eduardo Jordan is taking a step back after the Seattle Times detailed allegations of sexual misconduct from 15 women who worked with him. Jordan has apologized and denies many of the claims. Melissa Miranda says it's not just Jordan. Miranda is chef and owner at Beacon Hills Musang restaurant, she says that sexual harassment is a problem across the restaurant industry, and it needs to be addressed. Melissa, thanks a lot for taking the time to talk.

Melissa Miranda: Absolutely. Thanks for having me.

Patricia Murphy: So I really want to talk about the culture in your industry and how you think it might change. But first, Eduardo Jordan had a reputation, right? Among restaurant workers, and it may not be easy for listeners to understand the power that a chef like Eduardo Jordan has in the industry help me understand what kind of power he really wielded, and why it was so difficult than for people to come forward.

Melissa Miranda: I think there's so many different aspects in which give people power. I think first and foremost, like the media, and food writers and foundations such as the James Beard, or other folks that give out awards that allow chefs to become larger than life. They allow chefs to have this platform of fame, you know, and that with it comes this cloud or with it comes this like, I'm a James Beard winner, and so no one's going to question me. Or I clearly am so talented that, you know, everyone has to come work for me because I'm recognized by these people. And so that in itself, you know, is what lures people you know, and that that really is what it is like, so many young chefs feel that they need to follow that path because it's been so normalized in our industry, that they have to endure abuse. They have to endure sexual misconduct. Because it's just part of how you climb the ladder, and this is how it's always been. But you know, I've experienced it in my career, and when does it stop? You know, when do we stop promoting and idolizing people that shouldn't be wielding this kind of power? You know, especially when everyone in the industry knows, they just don't know how, how to come forward and talk about it. Sadly, you know, like, he's not the only one, there's so many more in so many unheard voices. And, you know, like, I think it speaks volumes that like, after the article came out that his almost entire staff resigned and walked away. That's a hard decision. Because what people don't understand is like his actions, not only just the misconduct, but like, their decision to quit leaves them without security.

Patricia Murphy: I wanted to talk a little bit about that, because, you know, we talked about the power the cult of the celebrity chef here. But in this case, his staff made a decision to leave, and what do you think that says about them, and about the conditions that they were working under?

Melissa Miranda: I think it hopefully is like a shift, you know, albeit a small one, but like, for workers, also to finally have the voice, you know, because of the power that people wield, like, oftentimes, like, they're, they're silenced, or they're paid off, or their departments like, find ways to get them out, you know, but to collectively make a statement like that. It's just showing that people aren't tolerating this anymore, no matter, the fame, you know, no matter. The Celebrity, quote, you know, status of these people, like it shows the humanity of it, and that we do have solidarity and in supporting, you know, the victims, you know, and it's hard, like, I'm not perfect, but I try my best, you know, I try and take care of my employees, I treat them with respect. Give them voices, empower them, you know, feed the community, like it shows on, I don't know, I just hope that it can empower other people or inspire other people.

Patricia Murphy: Well, let's talk about that for a second because of course, Eduardo's workers made a brave decision to leave the job. But what about the rest of us? Customers are pretty discerning about their food and their food choices? Should we be thinking harder about where we choose to eat?

Melissa Miranda: Absolutely. I think it comes back to the media and the writers and the bloggers and the influencers. That in itself has so much influence on how we eat, what you Google what you search, you know, and then accolades also add to that, because then, you know, there's clout and you can be like, I'm here at the best place or whatever. As consumers and diners like, first and foremost, I think you should really see what these restaurants are doing for the community, what stories they actually have to tell what kind of imprint they're leaving, and what imprint they hope to give back. There are a lot of places to eat in the city that don't get any love that are incredible. And if we don't support them, then the culture in our city is going to die. We have to stop celebrating these freakin' chefs that don't deserve it. Because this is only scratching the surface. This article is only scratching the surface of the chef's in Seattle that have been in power that a lot of people are still afraid of to talk about. You know, and I think that we're shifting more from the idolization of chefs and plates to like, what is good food? You know, are the people behind it cooking good food? Because like, that's what matters. Is your soul nourished? You know, am I supporting a business that deserves it? Because that's what's going to sustain us, right?

Patricia Murphy: You know, before I let you go, honestly, I think anybody who's had a job as a busboy or a dishwasher or waitress in high school has been kicked around in the restaurant industry, right? It's not an easy business to be in. I wonder if your compassionate, thoughtful approach to management and in your kitchen is the rule or...

Melissa Miranda: the exception? Yeah, absolutely. I mean, that's, that's something that we talk about here. Because this isn't the normal. You know what I mean? And that's sad to say. But I think what we should be doing, as media writers, as reporters, as food, journalists as influencers is to do their research of the places that are doing it. Right. So that there can be more examples for people to see. Why don't you highlight and feature these people that are doing the work and stop highlighting the people that aren't, you know, like you give credit where it's due? Because people are out here trying? No, we're trying in an industry that is so so difficult, and we sacrifice so much, but the ones that should be winning and the ones that should be seen, they should they shouldn't be getting the write ups, you know, they should be the ones that are shown as examples, so that more people hopefully can follow suit.

Patricia Murphy: Melissa, really appreciate you taking the time to talk. Thank you for being part of the solution.

Melissa Miranda: Thank you so much.

Patricia Murphy : Thanks for listening to Seattle Now, if you're liking what you hear, share a favorite episode with a friend or leave us a review. Jason Pagano produced today's show. Our production team is Diana Opong, Clare McGrane, and Caroline Chamberlain Gomez. Matt Jorgensen does our theme music. I'm Patricia Murphy. See you tomorrow.

Like what you hear? Leave us a review on Apple Podcasts! It's like catnip for our producers. 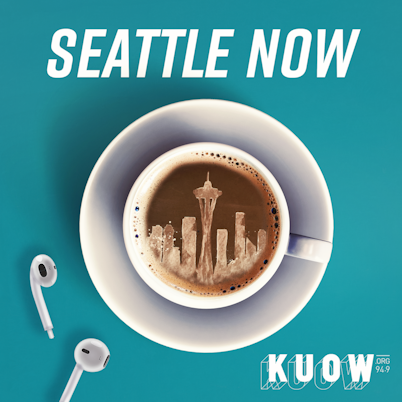 Seattle Now: When is the pandemic over?