There is no steeple or stained glass at this house of worship. Tyler Arnold doesn't need such things to practice his faith in this quiet, unassuming corner of Spokane.

“I’m a registered Jedi Minister and Jedi knight,” Arnold says while standing between a Planet of the Apes costume and a life-size Darth Vader lit by a red light saber.

His church, the Jedi Alliance, serves many purposes. It is a Star Wars church at its core. With equal parts arcade machines and memorabilia, the Jedi Alliance bears witness to sci-fi, fantasy, and punk rock. At this church, joy sticks and switches are holy relics that parishioners use to sing in a chorus of eight-bit hymns.

How Tyler Arnold became a Jedi minister, why he grew a congregation of memorabilia, or how Johnny Ramone’s guitar is partly responsible for it all (yes, really), began during a pilgrimage to a thrift store.

The testimony of Tyler Arnold

Arnold grew up against a backdrop of arcades and movie screens. Pop culture boomed in the 1980s, scattering relics from movie posters to toys and pinball machines. Many did not survive through the years. So when Arnold first saw a Return of the Jedi lunchbox on a thrift store shelf in the ’90s, he didn’t see a mere toy anymore.

“That lunch box just took me back. There was a lot of nostalgia in it,” he said.

It was as if an occult hand had reached down and placed the $9 Star Wars lunchbox in the path of this 16-year-old padawan. He had a revelation – pop culture relics such as this should not be collecting dust in the back of a thrift store, knocked around half-operational speakers and used exercise equipment.

“I bought it,” he said. “Now it’s not a toy; now it’s a collectible. As a teenager I realized that these should be cherished. Now I’m buying this stuff. I’m cleaning it up. I’m trying to get the most mint specimen possible.”

He began collecting, trading, and peddling. He stored away the most coveted pieces. He was so good that he eventually achieved a childhood dream – owning a guitar played by one of his heroes.

“Eventually, I did find one and was able to buy one of Johnny Ramone’s guitars,” Arnold said.

Like a nerf herder tending to his flock, Arnold continued to find and give shelter to lost toys. But things took a turn when he stumbled upon a Star Wars arcade machine.

“Now this is something you are definitely not supposed to have,” Tyler said.

“We stumbled into a vendor in 2007. The games were not making quarters at the time. They were not out on route. They were just in his giant warehouse. He was trying to sell them for about six months and he couldn’t get $100 a piece for them. We went in and bought a few games. We go back again and he was smashing the games with a small tractor.”

Arnold pleaded with the vendor not to strike down the machines.

“I was like, 'Dude! Please don’t smash another game,'” he recalled. “'I will take every game you plan on smashing.'”

“We went and got the biggest truck we could rent and came back and rescued 140 machines from his warehouse.”

Which is a lot more than most hobbyists can fit into the corner of a garage. His flock would go on to spend years wandering in a wilderness of backyards and backrooms.

“Where did we keep them? Everywhere," Arnold said of his growing congregation of video games. "We literally had them everywhere. We got code violations for putting arcade machines in yards. We didn’t have anywhere else to put them."

Eventually, Arnold found himself living on one side of a duplex and storing arcade games on the other. No inch was spared. Many games were stacked on top of each other. 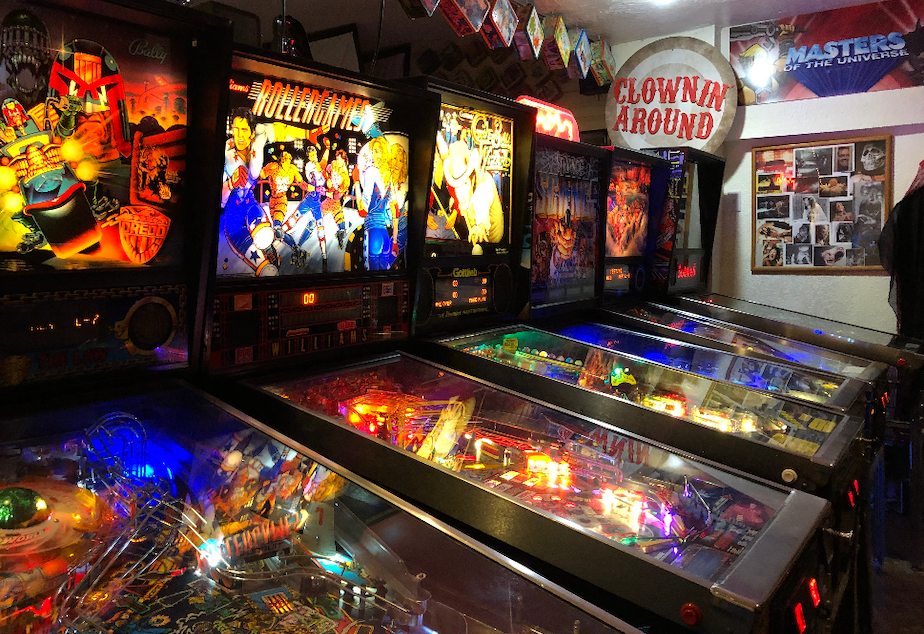 He knew there had to be a better place: A promised land where video games could be free to glow and bleep in all their glory.

Around the 10-year anniversary of Johnny Ramone’s death, he decided to put the guitar up for auction.

“The guitar goes for an astronomical, crazy amount of money,” he said. “(Then) I find this building that is huge. It’s over 5,000 square feet.”

It happened to be an old church building. Fresh off the sale of Ramone’s guitar, Tyler bought that plot of church land and planned to move in his assembly of arcade games, toys, costumes, and more.

For starters, Jediism – a religion based on the Jedi tradition in the Star Wars franchise – has been among the fastest growing religions in recent years as people across the planet put “Jedi” on their census forms. There are now Jedi churches in New Zealand and the United Kingdom (177,000 people registered as Jedi in the UK in 2011). More than 15,000 people have also registered as Jedi in the Czech Republic.

Jediism may not be recognized as an official religion in the United States. Though there is a recognized Jedi temple in Texas. And soldiers are allowed to put "Jedi" on their dog tags -- and many do.

So why not start a Star Wars church in Spokane? One that would be a monument to pop culture which evangelized big and small screens through blockbuster tales and Pac-Man.

“Your basic rights as U.S. citizen is the freedom of religion, so they can’t tell you what you are allowed to worship,” Arnold said. “So I knew that if I said it was a Star Wars church, and ran it like a church, and got my 501c3 and all that stuff in proper order, there is not a lot they can stop me from doing.”

“Under the church credentials I’m allowed to do that, I can open the doors and say ‘Come in, have fun with us.’”

Shortly after being ordained as a minister of Jediism in 2016, Tyler opened the doors to his church. And it was good.

Pop culture parishioners are invited to attend between 6-10 p.m. Fridays through Sundays, or by appointment (he also hosts birthday parties).

“Every hour I add to the schedule, that electrical bill goes up; I’m currently running 150 machines,” he said.

It's more than arcade games, however. When you enter through the front door, you will find a gift shop filled with collectible action figures, T-shirts, and other geeky elements of worship. The nave holds an extensive collection of video games and pinball machines. There is also a display dedicated to original Ramones memorabilia.

A basement reliquary holds remnants spanning the ’80s and ’90s. Beetlejuice shares a shrine with a Steve Urkel doll. There are extensive displays of Star Wars toys, He-Man play sets, and movie props from Terminator to X-Men. An entire corner is dedicated to Welcome Back Kotter. To list the entire collection would be difficult.

Arnold has been accused of starting a cult, which he maintains is far from the truth. There is no official dogma for the Jedi Alliance. He does not instruct others in the ways of the Force. And unlike other religious organizations, he does pay taxes.

“I feel that you can be Christian, you can be Catholic, you can be Flying Spaghetti Monster, whatever you want to be – if you look outside the front of my door it says ‘We accept you, one of us.’ I mean that for all people,” Arnold said.

Dyer Oxley is an online editor/producer for KUOW. This story was originally reported on the NW NERD Podcast.